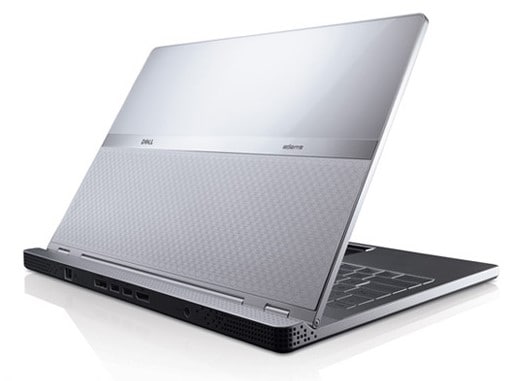 VERDICT
It’s no MacBook Air, but by Dell’s standard the Adamo is a really nice machine

Dell’s Adamo (from a Latin word meaning to fall in love) is a brand new laptop product line focused on design and mobility. Unlike the growing netbook market, the Adamo is actually a slim luxury ultraportable intended to compete with Apple’s MacBook Air or HP’s Voodoo Envy 133 laptop. Although not as sexy as the MacBook Air, the Adamo is still an amazingly sleek machine that boasts a strikingly similar aluminium chassis to HP’s Voodoo Envy 133. One thing worth noting is that the amount of time and energy required to produce such a chassis is simply too long to do on a mass scale (not to mention the cost), so the Adamo will be available in small volumes and at a price premium (from £1649).

Available in two base models, one black (or ‘Onyx’ as Dell calls it) and the other silver (again, ‘Pearl’ by Dell), both machines look incredibly stylish. However, the silver model probably has the edge since the black unit has an annoying habit of showing up fingerprints and smudges, even with a brushed aluminium surface. Colours aside, both models share exactly the same chassis and specifications. Roughly 165mm thick, Dell claims the Adamo is the thinnest laptop in the world. However, Apple might have something to say about that as its very own MacBook Air is thinner in certain places. Also worth noting is that the Adamo isn’t as light as the MacBook Air. At 1.8kg, it’s certainly lightweight, but the MacBook Air is a featherweight at 1.36kg.

Dell’s Adamo is a sterling example of craftsmanship and design. Its chassis is milled from a single piece of aluminium featuring precision detailing and a scalloped backlit keyboard. The touch-sensitive media controls are also a joy, as is the edge-to-edge 13.4-inch (1366×768) 16:9 LED-backlit display. The touchpad even has an unconventional metal surface, which looks and performs great but we’re not sure how durable/responsive this will be over time. The keyboard was less impressive thanks to too much flex in the middle.

Thanks to a solid state drive the machine runs cool and quiet. The Adamo is also fully connected thanks to 802.11n Wi-Fi, Bluetooth 2.1 and optional integrated mobile broadband. Due to the size of the machine, there is no built-in optical drive so you’ll have to budget extra for a matching external DVD+/-RW or Blu-ray drive, or even external storage if the 64GB SSD capacity is too restrictive. Power comes by way of Intel’s low-voltage 1.2GHz Intel Core 2 Duo U9300 processor and 2GB of the latest DDR3 system memory. The initial Adamo machine performs fine for normal multitasking – working within MS Office, Web browsing, sending e-mails and so on – but power users (video and graphics editors in particular) will need to look elsewhere. Battery life is good for around 3 hours, which is reasonable.

There is a reasonable complement of connectivity ports comprising two USB 2.0 ports, one USB/eSATA combo port, Display Port (dongle available to feed other video connections), Gigabit Ethernet, and headphone jack. The user-accessible SIM card slot is easily accessible on the right side of the machine, an obvious security issue compared to other laptops and laptops which secure the SIM card under the battery. The machine is supplied with Microsoft’s Windows Vista Home Premium Edition SP1 (64-bit) operating system.

Style-minded people who place a premium on precision craftsmanship and design will want to set the Adamo in their sights. While the machine is certainly an upper-end product, Dell has always done exceptionally well in the realm of mass production, so there is a reasonable chance that the Adamo could end up being more affordable than the competition by the end of the year. We hope so, as there’s a lot of demand for a light ultrathin laptop that can pack more power than the current netbooks.

But there might be a bigger issue. Dell has gotten pretty good at design over the years and Adamo proves it – Dell can actually be stylish! The problem is that you need a customer base that covets that approach and we’re not sure Dell has it. Apple’s strength is that it has a few million customers that will buy anything it puts out because it’s either a fashion statement or the brand says something about them. The turn Dell is trying to make is a tough one right now. Adamo is interesting, but probably too fashionable for the price. If cost isn’t an issue, this is the slickest Windows-based laptop around.