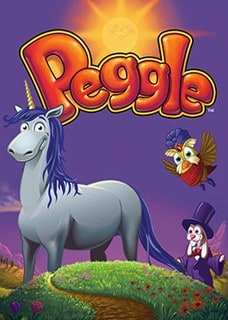 One of the most addictive XBLA games ever

CONS
Two-player duel mode won’t let you play with just one controller, which is crazy

Peggle has been available for a while on PC, Mac, iPod, Nintendo DS, mobile phones and the Web (it’s also rumoured an iPhone/iPod Touch version will be released sometime this year), and now the cross-over cult hit has finally made its way to Xbox 360 Live Arcade (XBLA). The eagerly-awaited XBLA edition includes Xbox Live multiplayer, an all-new Party Mode, achievements and online leaderboards, making the ball bouncer an essential purchase for puzzle fans (800 Microsoft points).

Peggle has become a cult gaming phenomenon, crossing over and becoming as big a hit with hardcore gamers as it has with casual players. Similar to all classics – Tetris, Bejewelled etc – Peggle is instantly accessible to players of all ages and abilities, and is near impossible to put down. Easy to play but harder to master, each level features a colourful 2D background filled with different coloured ‘pegs’. The objective in each level is to clear all of the orange pegs by hitting them with a ball shot from the top of the screen. Getting rid of these is how you progress to the next level. Whichever pegs you hit are then removed at the end of the turn.

This sounds simplistic, and it is, yet the game actually requires strategy to bounce the ball off pegs and other obstacles to clear as much of the orange pegs in the level as possible with the given number of balls. In addition to the orange pegs there are blue pegs (have no effect other than increasing the score), purple pegs (worth 50 times the amount of the blue pegs), and green pegs (activate a power-up based on the character the player has selected). An extra gaming element is that forever scrolling across the bottom of the screen is the ‘free ball bucket’ which awards you an extra ball should the shot go in.

Hitting a green peg activates the special power of whichever character you are playing as. There are ten characters in total, and each character must first be unlocked by beating their section in the Adventure mode. Thankfully, the game is broad enough in its design that no single power is more useful than the others. Hitting a green peg as Bjorn Unicorn, for example, allows you to predict the trajectory of your shots for a few turns. Tula the sunflower removes one fifth of the remaining orange pegs, starting with the ones closest to the green peg you struck. Lord Cinderbottom the dragon lets you shoot a fireball through the board, clearing swathes of pegs in one go, while Master Hu the owl gives you a zen-ball which automatically adjusts your next shot for maximum results.

Featuring 55 levels of ball-bouncing madness, ten unlockable Peggle Masters and 75 Challenge mode levels, Peggle offers a deep single-player experience. When you want to hook up with a friend there are two different multiplayer modes, letting you experience Peggle competitively online for the first time ever (TrueSkill ranked or player match). You can view instant replays of the highest scoring shots to learn a thing or two from true Peggle masters.

The hugely popular game now includes the first-ever online multiplayer Peggle experience with Peg Party mode, where up to four players can compete simultaneously over Xbox Live. The game also features local and Xbox Live two-player Duel mode and downloadable content. Basically, with the XBLA version PopCap games delivers even more features that appeal to the diehard enthusiast with an incredible multiplayer experience and community elements that take Peggle to new heights.

When you combine the multiplayer experience with some of the online features and downloadable content support, PopCap provides an all-new way to play Peggle competitively with room for expansion and future growth. Peggle has been optimised for the XBLA platform, works flawlessly with the Xbox 360 controllers, and looks dazzling in 720p high definition. We also love the way each level is cleared in a flurry of rainbows and fireworks, while Beethoven’s Ode to Joy soars from your TV. A neat touch for colour blind gamers is an option which adds a triangle to the green pegs and a plus to the purple pegs to make them easier to distinguish. Nice one PopCap! Microsoft’s Live Arcade keeps getting better.