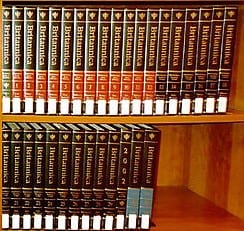 Great family resource that helps put the fun back into learning

We’re sure that when you were young your parents bought you a copy of Encyclopaedia Britannica, which was probably used constantly for weeks and then got relegated to obscure homework projects – not quite justification for the significant expense for all those big, beautifully bound books! Now you can buy in on DVD there’s much more in there and it’s a fraction of the cost. The latest version of the world’s most famous encyclopaedia packs the main Britannica program, a Students’ Encyclopaedia, a Children’s Encyclopaedia, Book of the Year articles, World Leader biographies, Dictionary, Atlas and more all into the price (£39.13) of a midrange gift, which is pretty stunning.

In an Internet age where the truth should always be questioned (no offense Wikipedia), articles in Encyclopaedia Britannica 2009 are written by Nobel laureates, historians and notable experts. Information is also fact-checked by the Encyclopædia Britannica editorial geeks, and unlike the Web – which is run by fanatics – content is accurate, rational and unbiased. Encyclopaedia Britannica 2009 also sports time-saving search results which are organised by relevancy, not popularity or paid placement, and no downloading is required – unless you want to stay current with regular updates.

Thanks to Microsoft’s Encarta, which transformed the encyclopaedia market, Encyclopaedia Britannica 2009 once priced itself out of the market, but is now very affordable. Encyclopaedia Britannica 2009 still beats Encarta hands down on the number of articles, even if the user interface isn’t as sexy, is easy to use and has a sensible screen layout. There’s also plenty of multimedia for today’s attention-deficit kids. With three age-specific databases for ages 6 to adult, you will easily find what you need: Britannica Children’s Library comprises introductory level articles and fun and easy learning tools for primary school children aged 6 to 10; Britannica Student Library offers intermediate level information and homework help tools designed to encourage confident learning ideal for students aged 10 to 14; Encyclopædia Britannica Library provides a vast array of detailed articles ideal for school, college students and adults.

The new features and updated articles in Encyclopaedia Britannica 2009 don’t honestly warrant replacing last year’s version, but if you don’t already have a copy it’s even better value now. Improved features include over 2000 biographies covering influential World Leaders from 2930BC onwards. Plus, 2000 Great Minds covering astronomers, mathematicians, scientists and others who shaped the world. Historical Timelines has been updates and you can now watch history unfold with timelines that show the people, events and discoveries of the past. The Britannica BrainStormer is an interactive way to understand relationships between ideas, subjects and people, and the Interactive A-Z QuickSearch finds answers to questions quickly and accurately. Also new is Britannica Book of the Year Articles. Britannica annually publishes the Britannica Book of the Year, covering important events and people that changed our world forever. You can browse through a year-by-year overview of the last 15 years, from the winners of the Nobel Peace Prize to the biggest box-office hits.

Generally reckoned to have been first published in 1768 (not the DVD of course!), Encyclopaedia Britannica is still respected as a great font of knowledge – even in this online age. Of course, some would argue that there’s no point in getting Britannica when you can browse the wealth of information on the Internet. The world’s largest online encyclopaedia, Wikipedia, has much more content (2.7 million article entries versus Britannica’s 74,000), but because of Wikipedia’s unique structure there aren’t consistent editorial checks and you’re never sure content is correct. Encyclopaedia Britannica 2009 is consistent and is safer for younger and inexperienced researchers. Encyclopaedia Britannica 2009 Ultimate Edition is a powerful and effective information resource, particularly good with for younger users with its wide range of extra features for children and teenagers. It’s also great value.