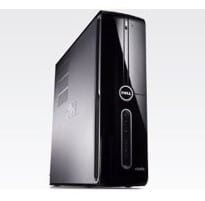 CONS
No Core i7 support; lack of upgradability

Earlier this year Dell added new models to its compact Studio desktop range. Unlike the eye-catching and diminutive Studio Hybrid (from £429), the Studio Desktop (from £349) and Studio Slim (from £429) go for boxy rather than curvy. Still a lot smaller than a regular desktop PC, inside lurks a choice of above-par features including Core 2 Duo or Core 2 Quad CPUs, Blu-ray drive and discrete ATI Radeon graphics card with HDMI. The larger Studio Desktop has more expansion room in the shape of an extra 5.25-inch drive bay free, while the power supply is bigger too: 350W on the Studio Desktop while the Studio Slim makes do with 250W. Both have an array of front-mounted ports, including USB 2.0 and audio, and the Studio Desktop also has a multi-format card reader.

The Studio Slim certainly isn’t as sexy as the Studio Hybrid, but its piano black finish is passable – especially for home workers and small businesses wanting to slot the machine neatly on a desk or next to a coffee table in either a vertical or horizontal orientation. Consumers looking for eye candy will probably have to look elsewhere. On the plus side, Dell packs an enormous amount of technology inside the relative compact box and doesn’t charge a price premium for its efforts.

The Studio Slim’s connection options are very good for a slimline computer, comprising eight USB ports (two front, four back, two internal), a single 1394a port, 10/100/1000 (Gigabit) Ethernet LAN, integrated 7.1 surround sound, headphone and microphone jacks, VGA and an HDMI port. With the wireless Draft-N LAN card you can easily connect to the Internet without messy wires holding you back, and built-in digital TV tuner lets you sit back, relax and watch your favourite television shows right from your desktop. Sadly there is no eSATA port to accommodate the growing number of external storage solutions, nor is there an integrated media card reader.

This narrow PC sports a practical design for those short on space, but the compact design also means that the notion of upgrading is merely wishful thinking. The tight space and Dell’s proprietary interior design makes accessing the slingle PCI, two PCIe x1 and single PCIe x16 slots tricky, not to mention that the PCI slots are covered by a giant retention bar that you have to remove prior to any upgrades. On the drive side, there are three 3.5-inch bays (two internal, one external) and two 5.25-inch bays.

Dell’s Studio Slim is a solid value desktop PC and offers an impressive mix of storage and connectivity. Intel’s Core 2 Quad chips are no second-rate processors, but they’re also no next-generation Core i7. In addition, the 8GB of DDR2 memory isn’t as productive under this system’s 32-bit version of Windows Vista as it would have under the 64-bit edition. But at least you get 500GB of storage space as standard (an above-average amount for the value-PC category) to store your ever-growing range of multimedia, and ATI’s Radeon HD 3450 graphics card is no slouch, either. Sure it’ll struggle with the latest 3D games, but casual gamers have nothing to worry about. Overall, the Studio Slim is above-average value PC for general Windows performance. Just remember to budget for a monitor.