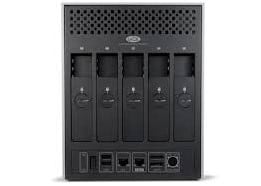 CONS
No status LCD; no wireless connectivity; no data compression or encryption tools

Designed by Neil Poulton with the modern power-crazed enthusiast in mind, the 5big Network (starting at £571) is housed in a sleek and durable – albeit unassuming – aluminium tower with five lockable, removable drive trays. Its stackable design helps to save space, and the large blue status light on the front is reminiscent of HAL 9000, the infamous fictional computer in Arthur C. Clarke’s Space Odyssey saga. In conjunction with five lights above the disk bays at the rear, there are plenty of flashing alerts to indicate normal operation and, crucially, damage to the array, drive failure and temperature problems.

The browser-based access and management system allows you to quickly set up the unit and allows up to 25 concurrent network users to share, store and access data without taxing the bandwidth of a central server. The unit additionally features Active Directory Support (ADS) for easy integration into Windows-based networks and a Wake on LAN (WOL) function, indispensable features for IT managers. If you’re going alone and don’t have colleagues to worry about, the biggest benefit of the 5big Network is that it does not require connection to a server because it connects directly to a network over Gigabit Ethernet.

There’s no wireless connectivity built-in however, so unless you put it next to your router or deploy PowerLine networking, you’re going to have to contend with ugly Ethernet cabling. Luckily, deployment of the 5big Network is plug-and-play with common IP services such as the Dynamic Name Service (DNS). The device even come pre-configured to support Network File System (NFS) and Common Internet File System (CIFS) and typically requires only a few minutes of configuration. Public read or write access can be given, which is useful if visitors need to dump data onto the box, but for day-to-day use you can use user accounts and groups to keep data separate and restrict access.

In the most complex instances, additional configuration steps may be required (e.g., to create virtual volumes or to customise RAID configurations). However, these steps are usually performed offline and before device installation. No downtime is associated with deployment of the 5big Network. When it does come to actually managing the device, it has its own software utilities so you can monitor and manage it via standard SNMP-based network management systems already in use. In short, deploying the 5big Network does not require additional IT skills or new storage management programs, but you’ll find everything makes a lot more sense if you do have a little networking experience under your belt.

Without a general-purpose operating system, the 5big Network has fewer components to fail and fewer reasons to go offline. High-availability configurations with RAID 5 or RAID 6 modes (RAID 10 and RAID 0 are also supported) enable continuous access to data, even in the event of a disk failure or other disruption, and support for up to 7.5TB (7500GB) using five hard disk drive bays means you shouldn’t run out of space in a hurry (2.5TB and 5TB versions are also available). Heck, you can expand storage even further by connecting external hard drives via its Hi-Speed USB port or three eSATA ports. The unit comes with essential data backup facilities (Genie Backup Manager Pro for Windows and Intego Backup Manager Pro for Mac), allowing you to easily set up scheduled incremental backups onto external disks to protect the 5big Network’s data. Both software utilities also provide disaster recovery options, in the event that your system won’t boot or your hard disk drive becomes corrupted.

Replacing a hard disk drive only takes a few seconds, but you’ll have to rummage around your pockets for a coin to turn the lock. Pulling the bay’s handle then lets you slip the entire hard drive free from the 5big Network. A really neat feature is that the 5big Network is hot-swappable, meaning you can swap drives around while the unit is powered – a useful feature for replacing damaged drives. Simply plug in a new drive and the 5big Network will configure itself over Dynamic Host Configuration Protocol (DHCP), a protocol used by networked devices (clients) to obtain the parameters necessary for operation in an Internet Protocol network.

LaCie’s 5big Network delivers impressive storage capabilities for small networks. Not only can you benefit from huge capacities thanks to the supplied Hitachi SATA drives (7200rpm), but also from a complete backup solution for your data. Compared to traditional four-disk RAID towers, it uses around 25% less energy, and its cooling system is typically 37% quieter, despite the additional disk. The fact that the drive looks really sweet is a big bonus too! If you’re looking a storage device to share over a wired network and consider design a very important feature, LaCie’s 5big Network would make an ideal addition to any workgroup. Just be prepared to splash out an impressive £1258 (£0.16 per GB) for the flagship 7.5TB model. The biggest criticism is that backups are neither compressed nor encrypted, and you’ll need to consider the security of sensitive files as backup drives can be attached to the device.