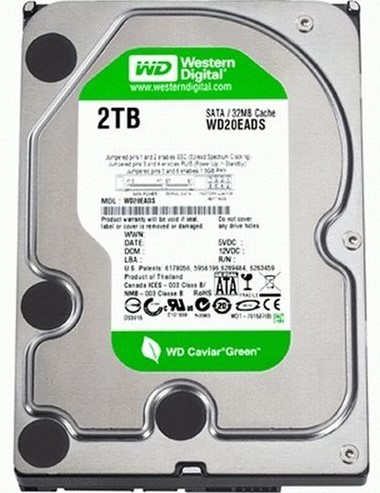 Ideal for PCs, external storage, and other devices that require a huge capacity

In 1980 when the personal computer was just starting to show up in the office, hard disk drives were typically no larger than a few megabytes in size. And if you had a 10MB drive it was huge! Everyone wondered if you could possibly ever fill that drive up – it seemed an impossibility! And then, the computer manufacturers started bringing out ever larger drives. Remember when the 20MB drive made its debut? What about the debut of the 500MB drive? It was incredible…

Nowadays, we have stores selling storage devices providing for more than a terabyte (1000 gigabytes) of storage capacity space. And, again, we find ourselves asking the question: how could we possibly ever fill that thing up? Well, things have just gone from the crazy to the ridiculous with the release of the world’s highest capacity drive (The previous top honours for capacity went to Seagate’s Barracuda 7200.11 1.5TB drive).

Western Digital’s (WD) Caviar Green 2TB (WD20EADS) offers a massive – you’ve guessed it – two terabytes (2000 gigabytes) of storage capacity. To put this into perfective, one of these Serial ATA (SATA) drives can store up to 571,000 digital photos, 500,000 songs (MP3), 50,000 songs (uncompressed CD quality), 150 hours of Digital Video (DV), 880 hours of DVD quality video, or 240 hours of HD video. Truly gone are the days when you have to worry about where you can stick all your pictures, music, and movies. And with RAID support, the possibilities are mind-blowing.

A number of advanced technologies enable the speed, capacity and performance of the WD20EADS. StableTrac secures the motor shaft at both ends to reduce system-induced vibration and stabilise platters for accurate tracking during read and write operations, while IntelliPower fine-tunes the balance of spin speed, transfer rate and caching algorithms designed to deliver both significant power savings and solid performance. Furthermore, IntelliSeek calculates optimum seek speeds to lower power consumption, noise, and vibration, and NoTouch ramp load technology helps to ensure the recording head never touches the disk media to reduce wear to the recording head and media, as well as better drive protection while in transit.

As hard drive capacities increase, the power required to run those drives increases as well. WD’s WD20EADS makes it possible for energy-conscious users to build a system with massive storage capacities and the right balance of system performance, ensured reliability, and energy conservation. The drive is also environmentally friendly due to relatively lower power consumption, and it runs cool and quiet operation. What more can you ask for? Well, speed is a tad disappointing – the WD20EADS lags behind smaller-capacity drives such as WD’s RE3 Enterprise 500GB and VelociRaptor. This is due largely to the fact that the drive’s rotaional speed is 5400rpm, which results in a latency of 5.5ms rather than the 4.2ms you typically get on a 7200rpm drive.

Unless you’re a speed junkie, you should be more that satisfied with its 11p per gigabyte up-front cost and green credentials. Before you take the plunge however, it’s worth noting that Seagate is hot on WD’s heels. The company’s 7200.12 (2TB) drive should be out soon, so then it will be a battle between who has better transfer speeds (and a better firmware, apparently). Since the 7200.12 is supposed to be much faster than the company’s 7200.11, Seagate will probably take the speed crown.