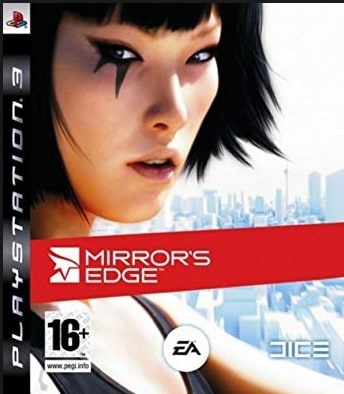 Totally original first-person action adventure game, but it’s no walk in the park

From the makers of the amazing Battlefield franchise comes a first-person action adventure unlike any other. Available for next-generation consoles and the PC (that’s what we like to see – Ed!), Mirror’s Edge definitely takes risks. Moving the first-person game in a totally new direction, DICE, an Electronic Arts studio, has done something radical with the traditional established mechanics of first-person movement. What makes Mirror’s Edge special is that it changes the way that you are able to move. No more restrictions, no more being blocked by simple barriers such as walls and fences. In Mirror’s Edge you can move like a real person (albeit a very flexible one!), with the ability to run, jump, vault and slide in a way that has never been seen before in a first-person game. Mirror’s Edge is also special because it introduces a strong iconic videogame heroine called Faith, who, predictably, is very hot.

In a modern world where communication channels are highly monitored and the movement of human traffic is closely watched, Faith is known as a ‘runner’ – information couriers in the game’s sterile, totalitarian metropolis. When Faith’s sister gets framed for a murder she did not commit, Faith finds herself on the edge of the city, on the wrong side of the law. Faith is skilled, but she’s certainly not a superhero. She has her flaws, like all of us. In short: she’s real. That’s her appeal. Mirror’s Edge delivers you straight into the shoes of this modern day heroine as she traverses the vertigo-inducing cityscape, engaging in intense combat, fast-paced chases and challenging puzzles. With a never-before-seen sense of movement and perspective, you’ll be drawn into Faith’s world. Live or die? Soar or plummet? One thing is certain, in this city you need to learn how to run – and fast!

Unlike almost every other first-person shooter, in Mirror’s Edge you don’t ever have to fire a bullet – unless you want to! Essentially, each level requires you to get from one end of a map to the other, without getting shot by police or falling off large buildings. Think of it like a modern day platformer. But it’s the way you get around the maps that’s so cool. You can string together an amazing arsenal of wall-runs, leaps and vaults in fluid, acrobatic movements that turn every level of the urban environment to your advantage and salvation.

In first person every breath, every collision, every impact is acutely ‘felt’. Heights create real vertigo (at least they did for us!), movements flow naturally, and collisions and bullet impacts create genuine tension. Your speed and agility allow you not only to evade, capture and perform daring escapes, but also to disable and disarm unwary opponents, in a mix of chase, puzzles, strategy and combat. You’re not totally left to your own devices: Runner vision allows you to see the city as Runners do. Thanks to clever colour-coded hints, rooftops become pathways and conduits, opportunities and escape routes – stick to the highlighted path and you’ll make it. And dispatcher/fellow runner Mercury is always an earpiece away (assigning objectives and barking at you to keep moving).

Understanding how to control Faith confidently is the greatest challenge in Mirror’s Edge. While the ultimately manageable control scheme does work, it takes a while to fully understand. For instance, one button stands in for all ‘up’ actions – jumping, hurtling over obstacles, scuttling up vertical surfaces, and pulling Faith onto ledges – while another is for all ‘down’ actions: sliding under pipes, ducking into vents, and tucking and rolling out of dangerously high jumps. Then there are other controls for combat. Once you’re familiar with Faith’s abilities and their limitations – imparted through a much-needed tutorial – you’ll be able to see potential routes through the world. And it’s only after a few hours into the game that you’ll start to feel confident enough to start worrying about stylish moves and quickest routes – up to that part you’ll be totally transfixed on not falling off skyscrapers! But thinking more ambitiously can certainly pay off, as most environments feature at least one ‘advanced’ route. Experimenting with unsure jumps doesn’t always pan out, but they feel incredibly satisfying when they do.

Mirror’s Edge is definitely not for everyone. The controls took us ages to get used to, as did fully understanding the tutorial which is vital for progressing in the game. But there’s no doubt that it brings something new to the action-adventure genre. Mirror’s Edge succeeds in creating an entirely new experience, with a different type of heroine and a world that not only looks fresh (if overly saturated and under populated), but has unique gameplay. It sounds brilliant too, the narrative and voice acting are great, and the game is just long enough (8 to 10 hours). Once you’re done with the single-player campaign you can play the Time Trial, which challenges you to find the fastest route across various maps. You can upload your best time to the Mirror’s Edge leaderboards for your friends to download and compete against. What’s also neat is that you can see your friend’s ‘ghost’ run as they race their way through the course to the top of the leaderboards. This is a great feature that adds longevity to the game once you’ve completed the single-player campaign.

Seasoned gamers will be able to jump straight in, but those less experienced with fast-paced action games played through the eyes of the protagonist will find Mirror’s Edge tough going. It’s an excellent game that puts a unique spin on the popular first-person genre, but it certainly won’t be everyone’s cup of tea. The platforming action is good, but combat is terrible. The hit detection is off, the ‘boss’ fight suffers from random cheap hits, and the disarm never works right – at least on the armoured S.W.A.T. who seem to be made of bricks. The world feels too sparse and vastly under populated with ‘normal’ people, and progressing is simply a case of trial and error – fall, die, try again! It’s also a bit hard to gauge how far Faith can fall, while surviving. Finding the right path through the rooftops and interiors is not always obvious either, even when using the guidance button, and blundering through is not always an option. Exploring off the beaten track is though, but the rewards are fairly limited.