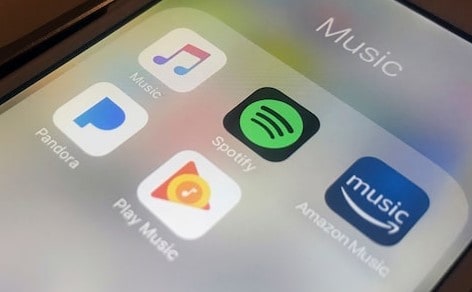 Spotify is an innovative digital music service offering music fans instant access to a world of music. Spotify enables on-demand streaming of audio content and aims to be better alternative to music piracy by offering a superior user experience, while monetising licensed content with both an ad-supported, free-to-the-user model (advertisements in the client window and/or in between songs) and a premium, paid model (£9.99 per month). Alternatively, a day-pass cost 99p and gives access to Spotify for 24 hours without advertising. The service also provides a marketplace for additional products such as live events, music downloads and more. The user must set up an account in order to use the software.

After downloading, installing and setting up an account (can be used on several computers, but can only play music at one computer at a time), you’ll be singing along to the genre, artist, albums or song of your choice as well as by direct searches. Although it is not possible to save the streamed music for use outside the application, a link is provided to allow you to directly purchase the material via partner retailers. With Spotify you are never far away from the song you want. Furthermore, there are no restrictions in terms of what you can listen to or when. Forget about the hassle of waiting for files to download and fill up your hard drive before you get round to organising them. Spotify is instant, fun and simple. Because music is social, Spotify even allows you to share songs and playlists with friends, and even work together on collaborative playlists – Friday afternoon in the office might never be the same again!

Spotify lets you create Pandora-like radio stations based upon a favourite artist. Instead of using the music genome to find similar tracks as Pandora does, and instead of using the wisdom of the crowds to populate their radio stations like last.fm does, it uses the All Music ‘similar artists’ data to populate radio stations. Spotify makes good use of data too, showing artist biographies, photos, and album art. Spotify also has a genre/era based radio. You can choose from a set of 18 top level genres, and narrow down the year of interest to give you a focused, but artist independent radio station. Any song that you see in Spotify, you can play instantly. Spotify also lets you create playlists of tracks. Playlists are saved and you can play them back at anytime. Spotify may also be able to provide persistent URLs for songs, something that the Web has been needing for quite a while.

Spotify works by transferring Vorbis-encoded music tracks over the Internet through the combination of server-based streaming and peer-to-peer (P2P) technology. Even with slow Internet connections, there are no great delays when playing music. An Internet connection of at least 256Kbps is recommended, however, as the bitrate of a stream is approximately 160Kbps. What’s particularly special is that the sound files can be played on demand, as if they were installed on your hard disk. Songs are cached on your computer to prevent wasting bandwidth by streaming the same songs over and over.

The content of the cache is summarised in an index which is sent to the Spotify stream hub upon connecting to the service. This index is then used to inform other machines about additional peers they can connect to for fetching streamed data for individual tracks being played. This is accommodated by each client, upon startup, acting as a server listening for incoming connections from other Spotify users, as well as intuitively connecting to other users to exchange cached data as appropriate.

Spotify isn’t a flash in the pan. The company has penned a series of licensing deals with music companies including Universal Music Group, Sony BMG, EMI Music, Warner Music Group, Merlin and The Orchard for their content to be included in its digital music service. In other words, you have unlimited access to millions of tracks from a vast music catalogue. Sadly, Spotify is currently only available in the UK, Germany, France, Italy, Spain, Finland, Norway and Sweden, but throughout the remainder of this year it will be rolled out to further markets.

Spotify is a compelling new way of connecting artists and fans, which reflects the shift we are seeing in digital music from a total reliance on a-la-carte services to the addition of new models that provide instant and legal access to artists’ music. Spotify is a wide-ranging, flexible and engaging music experience – and it’s still in Beta. By offering a compelling choice of ad-supported and paid- for services, the platform is in a strong position to foster a loyal community of users and attract advertisers. Not only that, Spotify will be a powerful promotional and discovery engine through which artists can grow their fan-bases. Sound quality was also excellent in our tests, being both solid with minimal dropouts, and compared well to other streaming services like Last.fm and Pandora. The Spotify library had all of the popular music that we expected it to have, but it didn’t do so great when looking for less mainstream bands in genres such as black metal. The next generation of music services are going to be all about giving listeners music on demand. Spotify is going to be huge.