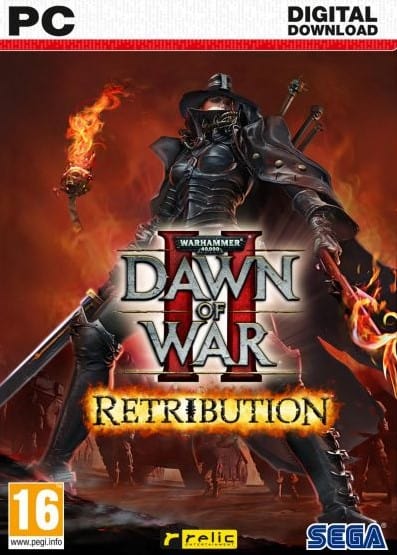 Raises the bar for RTS games

Relic Entertainment is at the top of its game. Company of Heroes and Warhammer 40,000: Dawn of War were (and still are) excellent games that redefined the real-time strategy (RTS) market with their innovative gameplay and amazingly polished presentation. Dawn of War II is the highly anticipated sequel from 2004’s original hit that also spawned three awesome add-on packs (Winter Assault in 2005, Dark Crusade in 2006 and Soulstorm in 2008).

Warhammer 40,000 fans should start salivating because Dawn of War II brings the 41st Millennium’s savage warfare to life like never before. Developed exclusively for Windows PCs and powered by an enhanced version of Relic’s proprietary Essence Engine 2.0, Dawn of War II takes you to the brutal frontlines of war where you’ll experience intense action and visceral combat through a non-linear single player experience and a fully co-operative multiplayer campaign.

Dawn of War II ushers in a new chapter in the series, as ancient races – including the dauntless Space Marines, Orks, Space Marines, Eldar and Tyranids – clash across ruined worlds on a mission to claim the galaxy and preserve their own existence. The best thing about Dawn of War II is that Relic Entertainment hasn’t messed with the game unnecessarily – apart from requisite base building. In fact, Relic Entertainment has taken everything we loved about the original Dawn of War and then added more than we could have hoped for. Leveraging the awesome Essence Engine 2.0, you will develop and lead an elite strike force through Games Workshop’s war-torn universe, engage in devastating combat among the ruins of fully destructible battlefields, and be immersed in an ever-changing (non-linear) single-player campaign.

The biggest change in Dawn of War II is gameplay improvements. It takes everything that was great about the original and combines it with the best that Company of Heroes had to offer. There is a heavier focus on cover, which gives more substantial defensive bonuses, and there is also new emphasis on methods of dealing with units in cover. Some weapons, such as grenades and other explosives, can destroy cover, while others, such as flamers, ignore cover bonuses completely. Other differences between Dawn of War II and its predecessors include improved unit artificial intelligence (squads under fire seek cover, for example), more realistically sized vehicles, and an improved physics engine.

The non-linear interplanetary campaign, playable as the Space Marines only, can be played either as single-player or cooperatively with another player through an online connection. The game’s campaign departs from those of Dawn of War in several key features. One of the most notable departures is that there are no base-building elements. Instead, you choose the units (each squad is highly unique in its combat specialty, personality, and even the voice acting of its squad leader or sergeant) to be used prior to beginning a mission and you cannot build new units once the mission begins. For players who like to see their heroes develop, there is a strong narrative focus on the sergeants of these squads who can increase in experience and skills as the campaign progresses, and cannot ultimately be killed. Rather than dying in a mission, squad leaders are ‘knocked out’ and can be revived either by a friendly unit in close proximity or upon completing the mission. There is also a far stronger storyline blended into the action as you battle all the other races to save your home planet.

You also only have limited reinforcement options. A major part of the campaign lies in choosing which battles and even planets to fight in, and there are consequences regarding which missions are chosen. There may be multiple distress calls to answer, for example, each available for only a limited duration. Once a mission is chosen, you may still have to choose between various objectives, having to decide between saving civilians or obtaining a powerful piece of wargear, for example. Squad leaders and commander units can be equipped with the wargear which is gathered from battlefields and slain enemies and by accomplishing objectives during missions. Throughout the campaign, as a Space Marine kills enemies and achieves objectives, he gains experience, ‘levels up,’ learns new abilities, and gains bonuses.

The original Dawn of War and its subsequent standalone expansions established the series as one of the industry’s leading RTS franchises. Dawn of War II helps to redefine RTS gaming, delivering brutal frontline action and tactics, and allowing you to get straight to the action with immensely fast-paced gameplay and a full co-op campaign, all in gory detail. Value for money is assured by the campaign, which offers a good 30 gameplay hours, and you can then play Skirmish mode where the three other races are opened up – including the elusive Tyranids. As a Games for Windows – Live game, it is also one of the few PC games to use the Achievements system from the Xbox 360, and is the first widely released, PC-exclusive game to use them. RTS gaming doesn’t get any better than this.