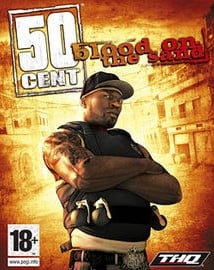 Entertaining, if completely mindless experience that 50 Cent fans will relish

CONS
Enemies are brainless; no multiplayer

With the video game industry creating an enormous buzz with the release of Grand Theft Auto 4, 50 Cent is looking to capitalise with his second video game, 50 Cent: Blood on the Sand. The game is a follow-up to his 2005 multi-million selling release, Bulletproof, yet the game is not only be better than the previous offering but covers new concepts and storylines. Blood on the Sand is something more exotic, more Hollywood blockbuster. This game set’s 50’s character against a cabal of international gangsters on a far-flung, bullet-riddled adventure. From the outset it’s clear Blood on the Sand is inspired by the movies ‘Three Kings’ and ‘Lock, Stock and Two Smoking Barrels’.

Hip-hop fans and gangster wannabes will welcome the long awaited sequel to 2005’s 50 Cent: Bulletproof. Hardcore shooters and casual gamers alike may be put off by Blood on the Sand’s simplistic gameplay, ridiculous storyline, lack of depth and extremely bad language, but Blood on the sand (available on the Xbox 360 and PlayStation 3, no PC version planned) is actually a fun game that you can pick up anytime and get stuck in.

50 Cent (aka Curtis James Jackson III) has reprised his role as videogame hero, along with buddies from G Unit who also star and provide voice and likeness. In this fictional follow-up story to Bulletproof, you get to play as one of the world’s biggest hip-hop stars in an all-out battle to protect 50 Cent’s assets and to collect payment from a crooked overlord. Swordfish Studios has successfully taken the sequel to the next level with improved combat and gunplay, original music (including exclusive unreleased tracks), lavish graphics and a new story – everything 50 Cent fans are looking for in a first-person shooter.

Blood on the Sand (around £39.99) puts you in the role of 50 Cent as he, and members of G-Unit, battle their way across two war-torn countries on a mission to collect payment from a crime cartel boss. The storyline is ludicrous, which is a shame for 50 Cent fans, but once you’ve gotten over that it’s time to have some fun. Basically, 50 Cent and his G-Unit crew finish a tour in the Middle East, but rather than receiving cash, they are offered a diamond-embedded skull of legends. When it is stolen, 50 Cent will do whatever it takes to get it back.

Blood on the Sand plays like a regular first-person shooter. However, it does have a couple of neat diversions to help differentiate it. Most significant is that the second player’s character (or computer-controlled player when played alone) can be one of three other members of 50 Cent’s band, G-Unit (Tony Yayo, Lloyd Banks, or DJ Whoo Kid), each specialising in different combat techniques. Another cool touch is interactive counter-kills. Basically, this is hand to hand combat – get too close to an enemy character and you need to tap a button on the control pad at the correct time (screen prompts) to issue counter attacks. The type of attack you pull off depends on how many skills you buy throughout the game. Collecting cash also lets you buy new weapons, though quite often you can pick these up for free from dead enemies or by bashing creates.

The game includes vehicle missions such as a driver-and-turret-gunner Humvee road chase and a helicopter-borne shootout, which aren’t anywhere as good as Gears of War 2 or Halo 3, but help to break up the monotony of shooting your way though decrepit buildings and car parks. The cover system works great too, encouraging you to keep on blasting, and there’s even a there’s even a ‘Gangster Fire’ mode that slows down time and allows you pop off a few headshots to elevate your score ever higher.

50 Cent’s first foray into video games was a bit of a mess. New developer Swordfish Studios has produced a vastly improved sequel that keeps you entertained from start to finish. Games are supposed to be fun, and Blood on the Sand delivers that in spades. Explosions? Check. Over-the-top story? Check. Hilarious dialogue? Check. Nearly non-stop action? Check. The co-op is fun, the action is intense and the only negative things about this game are that enemies are universally brainless and there is no multiplayer. If you’re not looking for something deep and innovative, Blood on the Sand is a good action arcade shooter. It certainly isn’t the best action game you’ll play this year, but that doesn’t mean you won’t have a fun time playing it. A huge improvement over the below-average Bulletproof, but definitely not a game for under 18s.