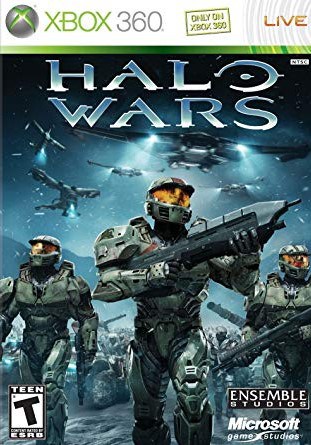 The best RTS game ever made for a console

CONS
Gameplay is perhaps too simplistic

Microsoft set the gaming world alight when it released Halo, a science fiction first-person shooter franchise created by Bungie – a company that’s so good it is now owned by Microsoft Game Studios. The trilogy of games centre on a protagonist called Master Chief, a cybernetically-enhanced human super-soldier and his artificial intelligence (AI) companion, Cortana. In fact, Halo has become so popular that the brand has expanded into novels, graphic novels, and other licensed products. Heck, there’s even a film in the works which is being developed by Peter Jackson!

Available exclusively for the Xbox 360 (no PC version planned, but we’ll see), Halo Wars (around £36.99) is another brand spin-off. Developed by Ensemble Studios (famed for its Age of Empires game series), Halo Wars is a real-time strategy (RTS) game based on the ‘Halo’ universe that all Xbox 360 owners have come to relish. There’s no Master Chief, but you take command of armies of familiar and new UNSC units in their initial encounters against the Covenant, an alien coalition threatening to obliterate mankind. The fifteen missions task you with everything from rescuing civilians to dragging gear up a steep slope, and often underscore the long-term ramifications of your command decisions.

You join the crew onboard the Spirit of Fire, a Phoenix-class colony ship converted for UNSC military use and guided by Serina, a spirited artificial intelligence (AI) persona. The Halo Wars storyline is set about 20 years before the events of Halo: Combat Evolved and follows the Spirit of Fire’s discovery of an ancient artifact during a journey to the planet Harvest, the first planet to be attacked by the Covenant. With the guidance of Serina, you are charged with directing legions of UNSC soldiers, Warthogs and Scorpions against Covenant Grunts, Elites, Ghosts and Scarabs, each group having its own strengths and uses in battle. You can also choose among Leaders that possess elite skills which can turn the tides of battle. Using various combinations of Leaders and units, you can create strategies tailored to your preferred playing styles and personalised strategies.

What’s so good about Halo Wars is that the game has been created from the ground up for the Xbox 360 console and its controller. Whereas other RTS games on the console have been hit and miss in terms of playability – at least compared to a PC – Halo Wars is actually a snap to play; almost every action in Halo Wars can be accomplished with two button presses. Sadly Halo Wars plays like a typical RTS and doesn’t bring anything new to the genre. Each level starts with you needing to establish your armies by building and expanding bases. Thankfully you don’t have to find land near resources as you can only build bases in predetermined places, and most resources are flown in. You don’t have to worry about complex technology trees either. It is at these locations that units are trained and upgrades resourced. However, there are only a few base locations on each scenario or map, making base fortification and defence a key priority. Destruction of an army’s last base results in defeat if a new base is not quickly re-established.

Units are trained, buildings upgraded, and special abilities utilised by using resources known as supplies. Supplies may be found on the battlefield and claimed, but the bulk of supplies are generated by building special structures at bases. The more UNSC supply pads or Covenant warehouses you have, the more income for use. Some buildings and upgrades may also require an additional resource, which is managed differently by each faction. Each base has only a limited amount of building room, so you must balance your resource buildings with other facilities, like those used to create vehicles. The number of units and vehicles you can bring to the field is constrained by a population limit; more powerful units cost more than one population unit. Upgrades can also increase the maximum population.

Combat in Halo Wars is the same as many real-time strategy titles. Ground vehicles are powerful against infantry, infantry is stronger against aircraft, and aircraft are exceptional at destroying vehicles. Each unit also has a special ability accessed by a button; for example, Marines throw grenades while Warthogs (vehicles) run over enemies. Humans also have access to their ship, the Spirit of Fire, and its special abilities; these include a powerful coilgun called the Magnetic Accelerator Cannon. In contrast, the Covenant have access to cheap and powerful defensive shield generators, offering their bases a level of protection the UNSC lack.

Halo Wars is no Warhammer 40,000: Dawn of War II, but it’s by far the best RTS ever developed for a console. Fans of the Halo series will adore the atmosphere (especially the stunning CGI cutscenes and music) and level of detail of the Halo universe, and casual gamers will appreciate the intuitiveness of the simple controls. On the downside, seasoned RTS players won’t find the amount of depth they’ve come to expect from a strategy game – it’s impossible to lay out your buildings in an inventive manner, gather troops into groups or even order them into simple formations – which cripples the game’s longevity. At least there’s the online multiplayer to keep you hooked where you can play as either UNSC or Covenant. Nonetheless, Halo Wars is an essential purchase for Halo fans looking for a break from a first-person shooter.