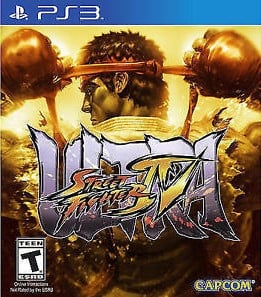 Few videogame series have had such a strong impact on their perspective genres the way Capcom’s Street Fighter has over the decades. Creating a global legacy spanning over twenty years of fighting games, the Street Fighter series has become a pillar in the fighting videogame genre. Street Fighter IV is the next iteration of the genre-establishing fighting game series. Available now for the PlayStation 3 (£27.99) and Xbox 360 (reviewed here, £27.99) with the Windows version coming in June (around £17.91), Street Fighter IV continues this tradition of excellence with a return to the classic 2D Street Fighter fighting action mixed with new characters, amazing visuals, and stunningly fluid gameplay.

Street Fighter IV features a mix of returning favourites including Ryu, Ken, Chun-Li and Guile along with new characters created for this game, such as female super-spy Crimson Viper, mixed martial artist Abel, wrestler El Fuerte, and Kung Fu fighter Rufus. Characters and environments are rendered in beautiful 3D, while the game is played in the classic Street Fighter 2D perspective with additional 3D camera flourishes. The hand-drawn look really is a sight to behold, with visual effects accented in calligraphic strokes, ink smudges and ink sprays during the fights. Six-button controls for the game return, with a host of new special moves and features integrated into the input system.

Thankfully the gameplay remains on a traditional 2D plane. Similar to Street Fighter II Turbo but with several features from Street Fighter III 3rd Strike, Street Fighter IV adds a new system called ‘Focus Attacks’ as well as Ultra moves. Pressing both light attack buttons is still for throwing, and both heavy attack buttons are for the personal action or taunts. Both medium attack buttons are for the focus attacks, a move (pressing medium punch and kick buttons simultaneously) that allows you to absorb an attack and launch a counter attack. The longer you hold down the medium punch and kick buttons the more powerful the attack. If the buttons are held for long enough the attack will be unblockable and cause your opponent to crumple slowly to the ground, allowing you to follow up with a cheap shot.

In addition to the powered-up versions of special moves introduced in previous Street Fighter games such as Super Combos and EX Special Moves, Street Fighter IV introduces a new type of powered-up special move. Ultra Combos are long and cinematic moves featuring a lengthy combination of punches, kicks and other fighting techniques. Just as there is a Super Combo gauge, there is also an Ultra Combo gauge (Revenge Gauge). But whereas the Super Combo gauge fills up when you hit your opponent or perform a special move, the Revenge Gauge fills when you take damage from your opponent. Along with the Super Combos, Ultra Combos are one of the only times the camera breaks from its normal fixed position to show a more dynamic, cinematic view of the gameplay. It’s these little touches (and more) that give Street Fighter IV a highly polished feel.

As a child, if you spent all your pocket money on arcade gaming, WWF cards and junk food, you’ll adore Street Fighter IV. Sure there is a lack of game modes and little depth in gameplay (it doesn’t go far beyond the jabs), the Focus Attacks and Ultra moves add just enough variety to meet your expectations. As with all button mashers, the moves in Street Fighter IV are easy to do, but difficult to master, and the characters and fights are awesome. The gameplay is flawless and the environment is beautiful. If you’re not a fan of fighting games Street Fighter IV isn’t enough to change your opinion, but for fans of the series it is an essential purchase. And let’s not forget that with the advent of online gameplay, Capcom may even add more downloadable content (characters, backgrounds, etc) to increase the longevity of the title.